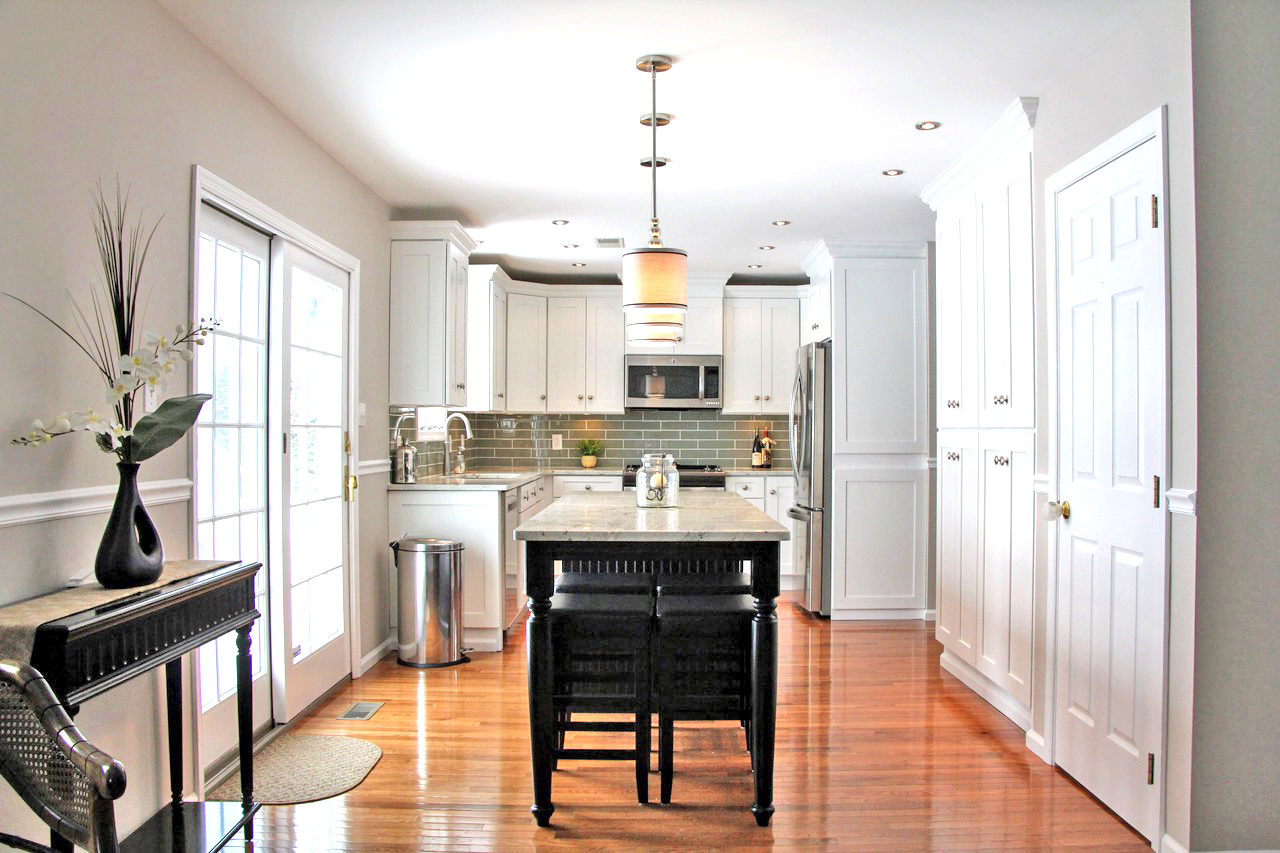 A Nazareth Kitchen Remodel: The Hardy’s had just purchased a house in Nazareth, PA that needed some remodeling and contacted us to help them out with redesigning the kitchen to make it their dream kitchen.

The old kitchen was badly in need of a remodel being dark, dated, and small. 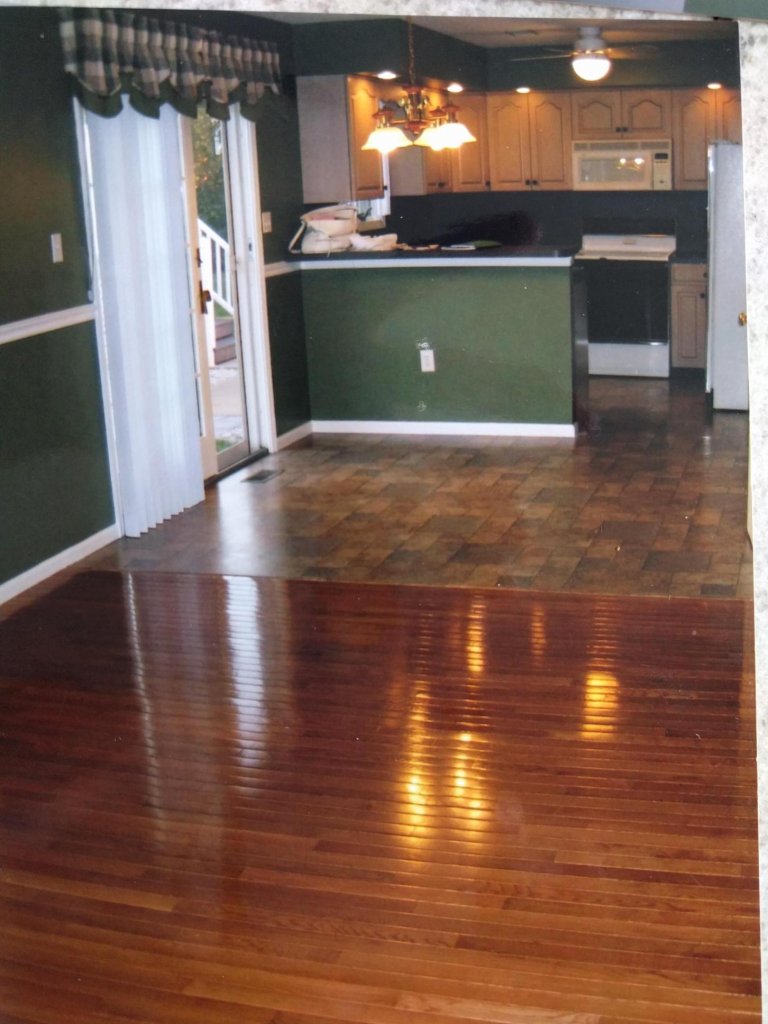 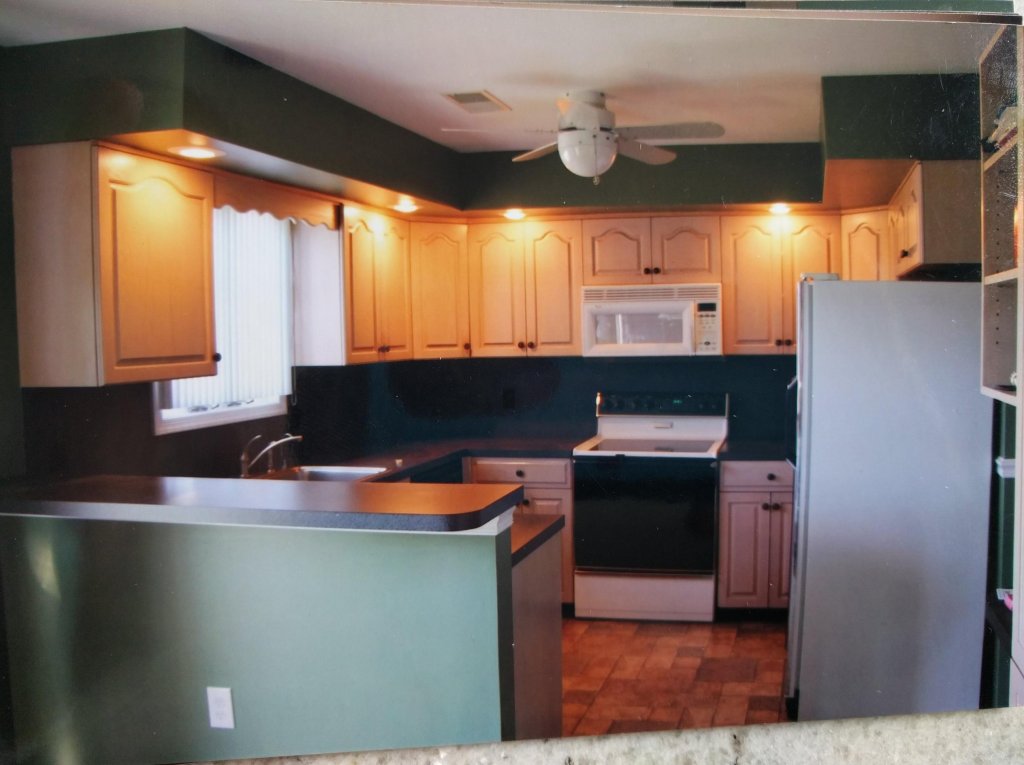 See the plans for their kitchen:

Plan: Create a larger kitchen with room to accommodate a center island with seating. Initially the homeowners had thought about taking out a wall. However it was a load wall and reconfiguring the space would be tricky. We decided the best plan to fit an island was to remove the peninsula and build a larger then envisioned island which would also function as a table with seating for five.

Another issue with the kitchen was its lack of sufficient cabinet space. This was solved by adding a bank of pantry cabinets which provided ample storage space for the homeowners.

The Hardy’s wanted a white kitchen with a darker island so we paired them up with shaker cabinetry in Aspen White and Walnut. The glass backsplash really pops against the creamy white granite countertops. New hardwood flooring was extended into the kitchen and matches seamlessly with the family room and dining area. 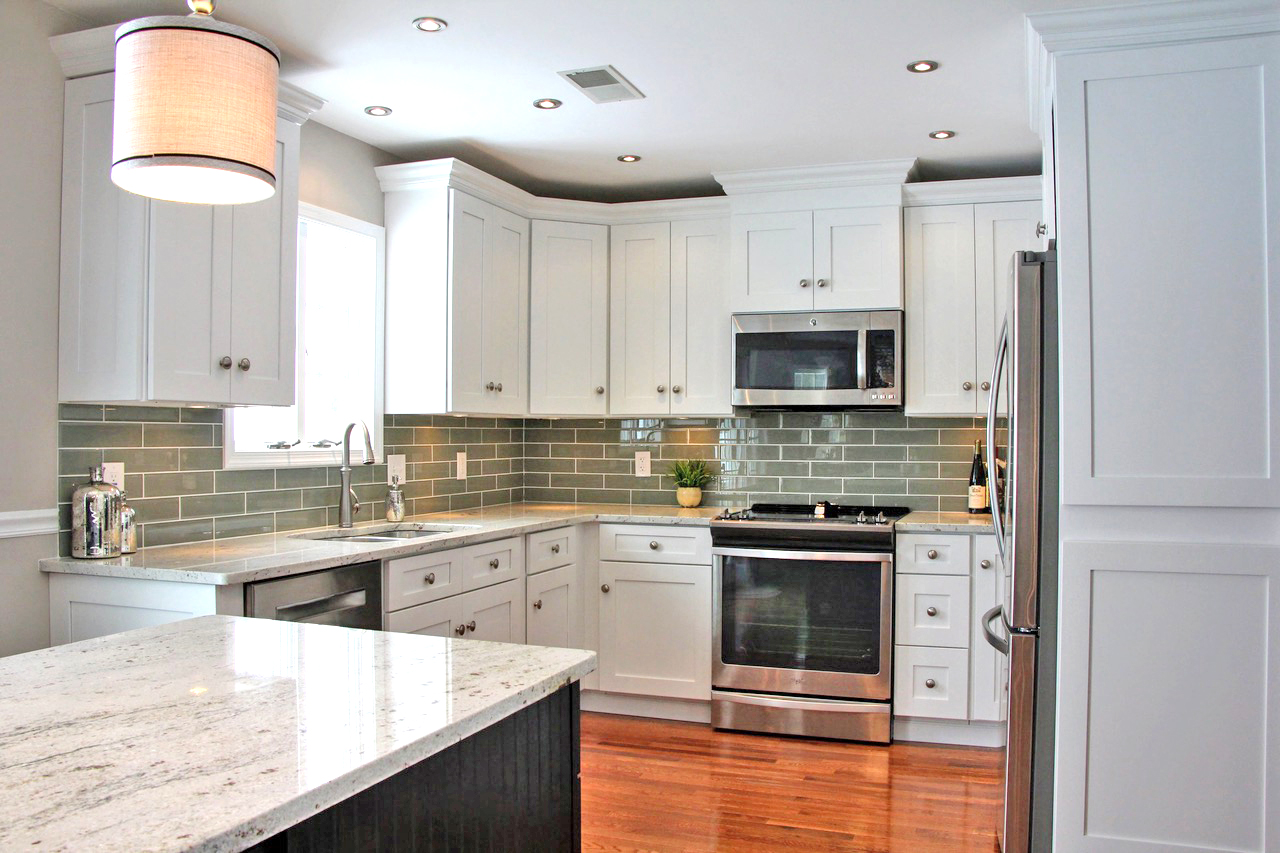 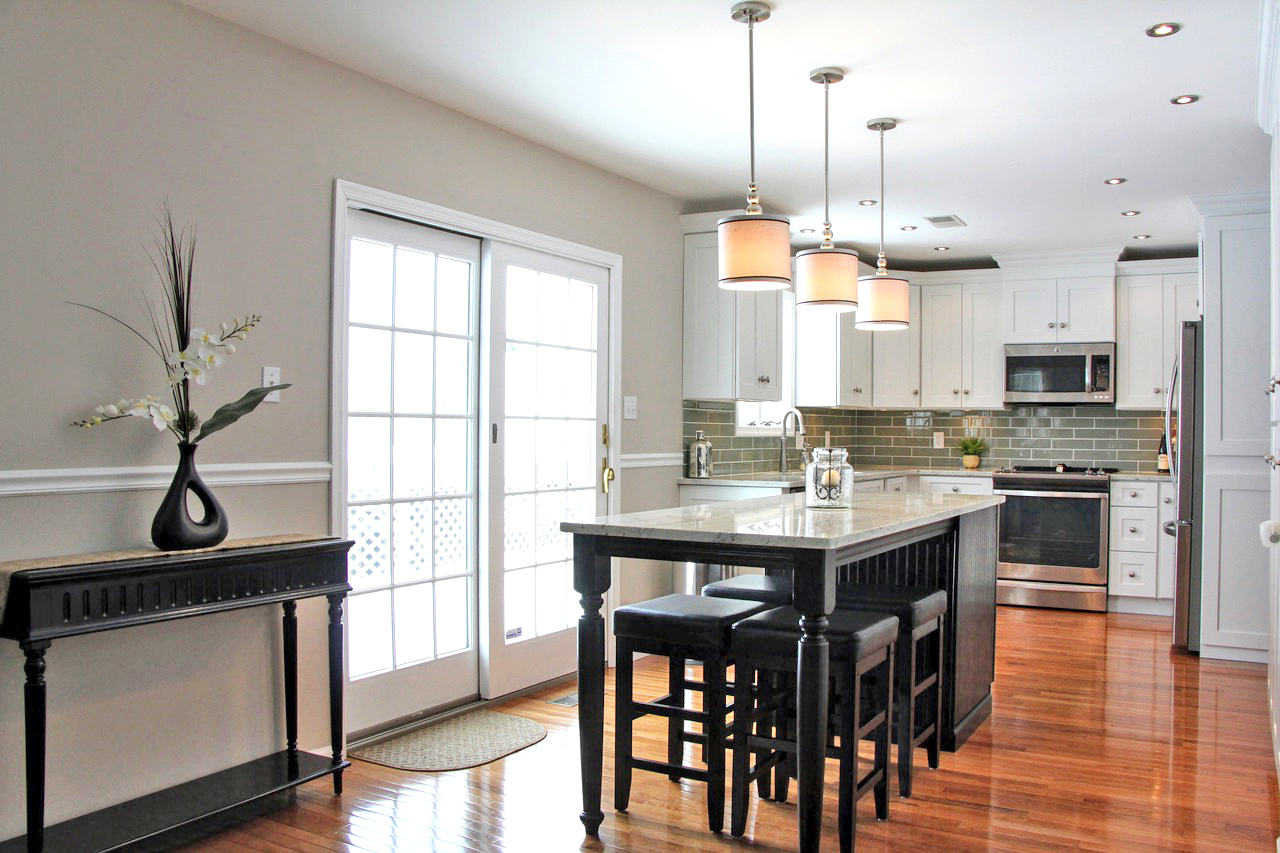 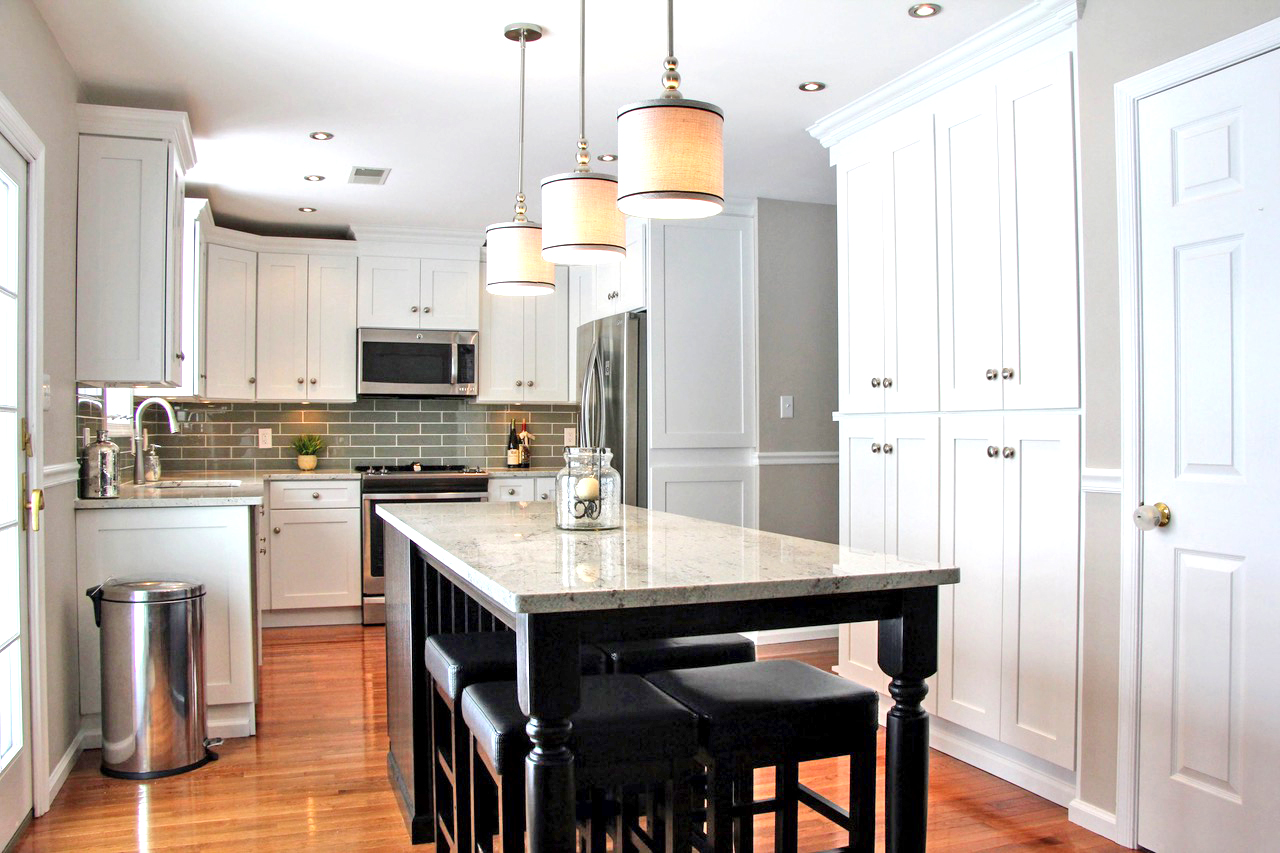 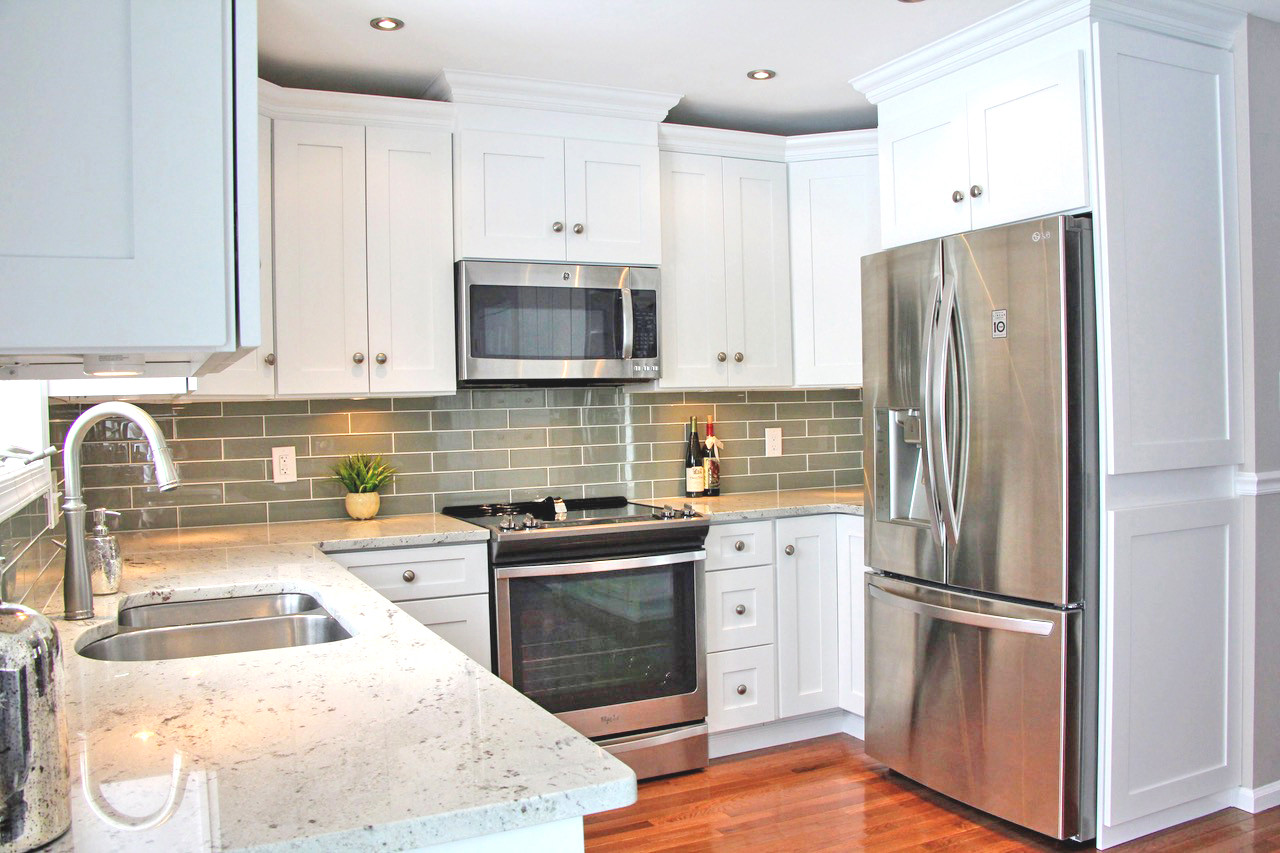 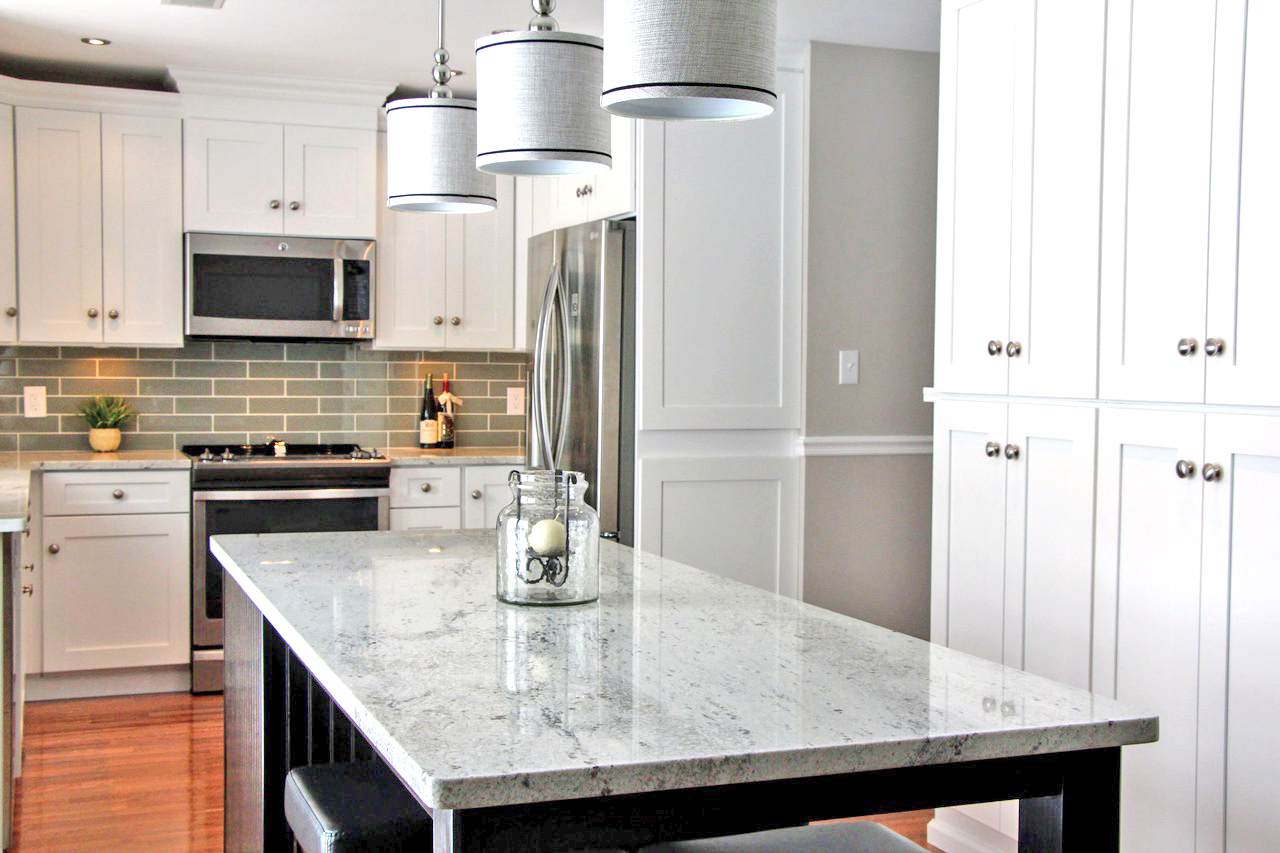 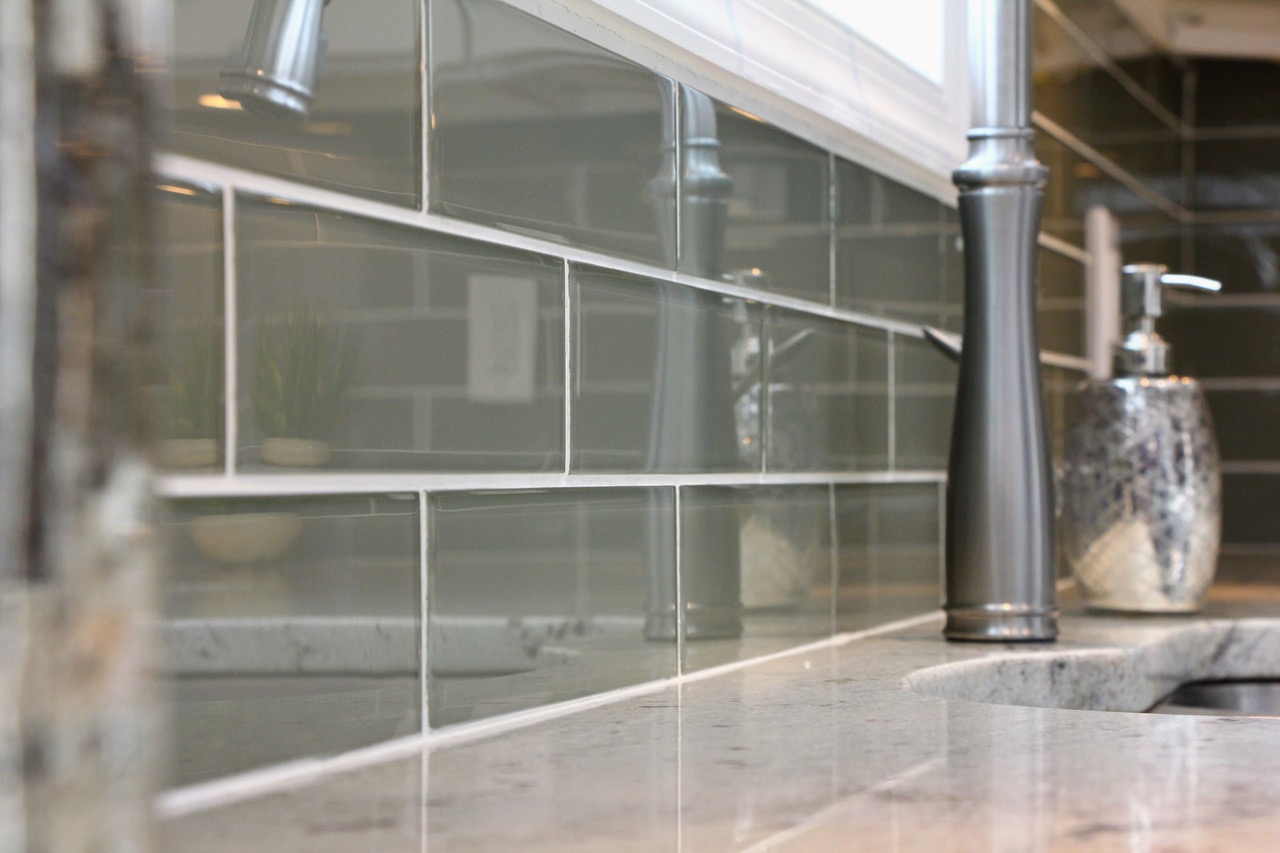 “ We love our kitchen, everyone always compliments us on it. Thank you so much.” 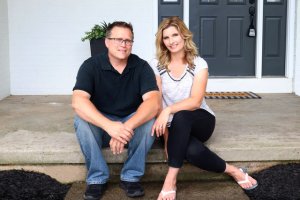 Scott and Jessica Holwick are the principals of ReStart Home Renovations. Scott brings years of construction expertise and fine craftsmanship to the business while Jessica helps provide the design work.

Jessica and Scott Holwick have built ReStart Home Renovations to fill a void in the market, by bringing personal service to one of the most important parts of life (our homes), and doing a beautiful job in the process.

Scott and Jessica love being active in the business, carefully curating the right materials, participating in and supervising renovations, and being present to personally meet with clients to consult them honestly on their best home remodeling and design options.

Are you looking for a beautiful new home which inspires and empowers you to live life to its fullest? We’d love to take the next step in the journey with you.

Working with Restart Home Renovations to renovate our kitchen, master bath and bedroom was a truly wonderful experience. Scott and Jess really listened and built upon the visions for our home improvement, while expertly guiding us on how to maximize our budget. It was clear that Scott takes great pride in his work by the flawless attention to details and exquisite craftsmanship. We absolutely loved working with them and are so pleased with the beautiful update to our home!

Scott & Jess have been amazing to work with! They are everything you’re looking for in finding a trustworthy contractor. They remodeled our bathroom after 3 other companies butchered the original job. Scott came in gutted the room & put it back together beautifully. They also renovated our garage into an in-law suite which came out better than I could have ever imagined. Their pricing is fair, work is both beautiful yet thorough they have excellent communication & are there for you throughout the entire process from start to finish. Thank you Scott & Jess.

Restart Home Renovations is a fabulous company. Scott and Jessica Holwick designed and remodeled our kitchen, powder room and laundry room and exceeded our expectations. They listened to our desires and needs and created an amazing space for us to enjoy fellowship with family and friends. Every detail was well thought out and covered from floor to ceiling and the final look is beautiful. We have had guests who have absolutely loved the remodel and have asked for a referral for their remodeling needs in the future. We highly recommend Restart Home Renovations and Scott and Jessica for your remodeling needs.

Scott is a highly skilled contractor who works to provide results that meet and exceed his customer’s expectations. Scott inspires trust by listening to the needs and desires of others and strives to  reflect their priorities. When Scott works with clients he sets reasonable expectations regarding timeline and price. Scott is diligent in meeting his goals. Scott’s reputation for excellence is growing due to his dedication and skill. People love working with him because he inspires confidence through his diligence, skill, honesty and friendly manner. Scott has raised the bar for all in his industry, and it is an honor to recommend him to you.

ReStart Home Renovations transformed our underused formal living room, office, and half bathroom into a luxurious main floor master bedroom suite with huge walk in closet and incredible walk in shower and soaking tub. We were so impressed with Scott and his team from the beginning- with the integrity, craftsmanship, and communication every step of the way. It is rare these days to find someone that will stay with you as their sole project from beginning to end, that will show up when stated, keep a clean worksite, do things WELL, and stay on budget! When we first contacted Scott last year, we knew we wanted a main floor master suite, but was unsure as to room design, flow, finishes, or even dimensions. He came out to see the space, take measurements, and we discussed our dreams for the space. He took our thoughts and came back to us with two floor plans. His wife Jessica is a talented designer and created several mood boards from which to choose. They created an accurate 3D rendering that enabled us to see how our space would ultimately look. Our project included renovating the existing fireplace and creating a custom mantle and surround; heated tile floors in herringbone pattern; reworking plumbing and electrical; custom wood accent wall; painting all the existing and new trim and crown molding; new wood floors that match our existing; removing part of the staircase banister and trim to create wall for new entrance into master suite; building tile shower with bench, rain shower and dual shower heads; barn doors; double door entrance; sconces; vanity and medicine cabinets; and much much more. The whole process was relatively stress free for us– which is quite an accomplishment for a home renovation project, let alone one on this scale. We highly recommend ReStart Home Renovations and plan to use them again for any future projects. We have zero complaints or suggestions to how they could even improve their services– they were that wonderful. Thank you for our dream space, Scott and Jessica! It turned out more beautiful than we ever imagined.